Good morning Elaine and welcome.Can I begin by asking you a little about yourself?

Hi, Jo, and thanks for the opportunity. I’m a forty-something wife and mother who has a passion for baking, and playing with words. I was born in Yorkshire but re-located to the North East nearly eight years ago. I’m a prolific reader and soaker-upper of useless bits of information.

When did you first decide you wanted to be a writer and how did you begin that journey?

Being an author was something I’ve wanted to do since I was 15, but at the time, it wasn’t a profession or a ‘job’ as far as other people were concerned. I’d been secretly writing stories with a couple of friends for a few years, but after being told to forget about it and get a job, that’s what I did. I packed all my scribbles away when I left school and got on with life.

In 2004, my husband and I adopted two children, and I decided to write a short book about our experience. Out of the 25 agents/publishers I approached, 13 rejected me and 12 never got back to me. Then, in 2012, I decided to self-publish the book on Amazon’s Kindle platform and it started to sell. That’s when the writing bug bit me again but this time, it refused to let go and an idea I’d first had when I was a teenager, came barging back into my mind and set up camp until I began to write it down.

What was the inspiration behind The Ties That Bind

I love reading and I read a wide variety of things. I do have favourites and there are books I’ll happily read more than once or twice, but I couldn’t find a book out there that was the exact story I wanted to read. Then, I read a couple of books that had made the headlines, and I realised what was – from my point of view – missing, the way one of the characters felt, it was all one-sided.
So I wrote the story which had been in my head all that time, but I wrote it from both sides, I gave both my main characters a voice, which at the time of writing, I had no idea if it would work or not.
But it did work, and knowing a few other people have enjoyed it as much as I have, is an added bonus.

Can you tell us something about your current WIP?

Hmm.
The recently completed Ties That Harm, is the sequel to Ties That Bind and follows Alexandra and Gabriel through the next chapter of their lives, along with the impact of the actions of a few other characters. The book is currently with the editors, but I’m hoping to release it during the summer months. I’m now working on a little idea for something quite different, and I’m seriously considering writing a cookery/recipe book.

Who are your favourite authors and why?

Sue Townsend, she wrote some seriously funny books. I’ve been reading the Adrian Mole Diaries since I was a kid, but my favourite of hers has to be, The Queen And I.
Dan Brown, I love stories of intrigue which also have a smidgen of real life mystery.
Ben Schott’s Almanac is a fabulous book of lists. If you want to know a complete list of Beatles number one records – and the dates they hit the top spot – or a list of the levels of Hell as written in the Divine Comedy, or the fielding positions of cricket … you’ll find them all, and more, in Ben’s book.
E L James and DM Miller both write romance but from completely different angles, and I love the feel-good books of Sophie Kinsella. For something filled with monsters, murderers and cataclysmic events, you can’t beat R J Smith, and underneath the blood sucking and wooden stakes, Bram Stoker’s Dracula, is a beautiful love story.
I also have a ‘to be read’ pile at least four foot high, (not including the Kindle list!) and I just know I’m going to find some new favourites in there too, such as Riley J Froud, Maria Gibbs, and Jo Rodrick.
And I can’t leave out H G Wells, just for his unbelievable imagination and the fact that the line, ‘Yet across the gulf of space, minds that are to our minds as ours are to those of the beasts that perish, intellects vast and cool and unsympathetic, regarded this earth with envious eyes, and slowly and surely drew their plans against us.’ sends a shiver down my spine every time I read it.

Just destinations? (spoil sport! 😀 )
Lyrics from a song by The Script appear in Ties That Bind, as too does a lovely piece of music by composer, James Oldrini. I’d love to be able to get Danny, Mark, and Glen, (James has already agreed) to sign a few copies of my book so that I can donate them to charities so they can auction them to raise funds.
Destination wise, New York, city and state, and Naples in Italy are firmly on my bucket list so that I can research these places in the flesh, rather than through Google Street View. And a mention on Steve and Karen’s Metro Radio Breakfast Show would be nice.

You’re about to take a sabbatical on a desert island for a whole year. What four thing would be ‘must-haves’ and why?

That is a question and a half! The Mom in me wants to say Hubs, Kids and the cat … the author in me wants to say laptop, mobile phone, internet connection and lifetime supply of chocolate.
So my four things would be:
i. Solar powered laptop with internet connection.
ii. Small, creepie-crawlie proof shelter.
iii. Glasses and sun hat.
iv. Monthly visit from the hubs, kids, and cat, carrying a suitcase of chocolate … 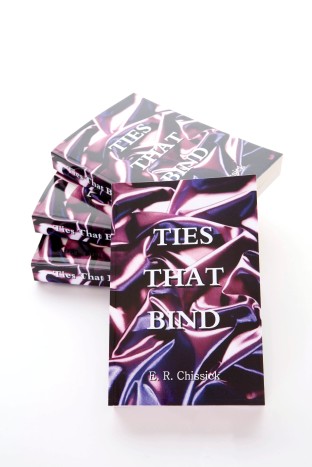 Alexandra Dinapoli has everything she could ever wish for, except what she really wants.
Leaving her family behind, she heads for New York City and starts on a journey to make her own way in the world.
Whilst there, she bumps into Gabriel Harland, an enigmatic Chief Assistant District Attorney, with whom she begins a love affair that is cruelly cut short when someone from her past surfaces in Gabriel’s life.
Will their relationship be worth fighting for or will the truth tear them apart?
Join Alexandra on her journey as she discovers the tenderness of new love, the sorrow of losing someone close, the pulse racing suspense of running from the past, the anger of not being in control, and the admission that some sacrifices have to be made for the sake of others.

Snippet from Ties That Bind:
Prologue
Fourteen Years Ago
Alexandra…

“Get. Off. Me. Sal!” I shout as loud as I can.
Sal is sat on the backs of my legs and he’s holding my arms behind my back with only one of his hands.
He’s older than I am; he’s just a year off being an adult and is already stocky and strong. He has me pinned down in the long grass at the bottom of the garden while my four year old younger brother Dante watches, with fear in his eyes.
I struggle like hell against Sal’s grip and I manage to kick my leg back, my heel hitting Sal’s spine. I know I’ve hurt him because he pushes back down on my legs. Crap.
Sal slaps the side of my head from behind me. I don’t see it coming and I wince. He knows how not to leave a mark.
“Leave my sister alone!” Dante shouts, starting to cry.
“Shut it, shrimp, or you’re next.”
Dante stops crying, Sal punches me in the ribs, hard and I gasp for air.
I can hear Mamma calling us for dinner and without another word Sal gets off me, stands up and strides away, heading back towards the house.
“I’m telling Mamma,” I manage to call after him, rolling over onto my back and folding one arm around my ribs, the other around my head.
“I don’t think so,” he calls back.
He knows I won’t tell, the last time I told I ended up with a broken arm after he snapped the brake cable on my bike. At 13 I’ve learnt to keep quiet.
Dante sinks to his knees besides me and rubs at my head with his stubby fingers.
“Sorry.”
“S’not your fault,” I say, taking my baby brother in my arms and hugging him protectively.
Dante is not like Sal, he’s not like me either. He’s gentle, caring, kind, the sort of child who has to have a full funeral ceremony when he finds a dead baby bird in the garden.
I know that he would never be able to stand up to Sal, so I do it for him; I take the thrashings from Sal that would otherwise leave Dante with more than an aching head and tender ribs.
Dante pushes out of my arms and gets up. He turns on his heel and runs out from the long grass, across the lawn and towards the house.
“Sal, Sal, wait for me…”
I turn and watch them over my shoulder. As Dante reaches level with my brother, Sal stretches out and pushes him to the ground, a little harder than playfully. Dante gets up, laughing and follows my elder brother into the house.
I turn around and wrap my arms around my knees, finally surrendering to my tears, tears for me, tears for Dante. When will he ever learn?