POISON IN THE WATER 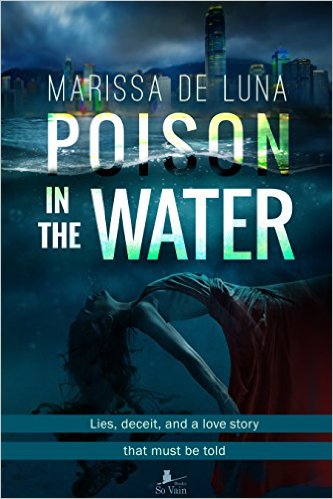 Career-driven fashion designer Celeste Broady meets the man of her dreams while traveling in Thailand. Alex Renshaw seems to have it all: the charm, the charisma and the wealth. After a whirlwind wedding, they move to Hong Kong and soon become the most glamorous power couple amongst the glitterati of the city. She is living her dream.

But the higher you climb, the further you have to fall. With Alex’s career blossoming, he’s increasingly away from home, and when his hedonistic and philandering best friend Bill arrives bringing with him a yacht and a decadent lifestyle, Celeste is forced to compete for her husband’s attention.

Her confidence in her fairytale marriage soon begins to fade, and when she stumbles over a dark secret, she realises she is in too deep and there is only one way out.

When So Vain Publishing offered me the chance to read a pre-publication copy of this book, I was pleased to accept.  The synopsis promised an interesting read.  What I did not expect was a great story which held me from the first page right to the end.

Clothes designer Celeste meets Alex while travelling in Thailand. She’s from a working class family while Alex is the younger son of Warwick Renshaw, one of Britain’s richest men.  Despite their different backgrounds they fall in love and eventually marry. The couple head for Hong Kong, Alex to manage Renshaw’s Chinese interests and Celeste to set up and manage a new branch of her company there.

Alex and Celeste step into the world of the uber rich; of glittering parties and life in the fast lane.  Alex is frequently absent on business but Celeste has her work and his return always brings an affirmation of their love.  She is aware that his father’s treatment of his mother has left him vowing never to be the kind of man he was, a serial womaniser with many mistresses.  Celeste feels safe and loved.  But the arrival in Hong Kong of Alex’s best friend Bill with his relaxed take on marriage changes everything.

The story begins with a prologue – Celeste is in London at a counselling session. We realise that something has gone terribly wrong with her marriage to Alex.  As she discusses her issues we are taken back to the beginning; to Thailand where they met and fell in love.  As the story progresses we begin to see easy-going Alex  hides a darker, controlling side. But this is only the beginning of the nightmare for Celeste.

I won’t say anymore because it would involve too many spoilers.  All I will tell you is that this book has many levels. It’s a love story, a story of friendship, of betrayal and deception.  An unputdownable read and a must for anyone’s TBR pile.

I would like to thank So Vain publishing for a copy of this book in exchange for an honest review.

1 thought on “New Book Review: Poison in the Water by Marissa De Luna”