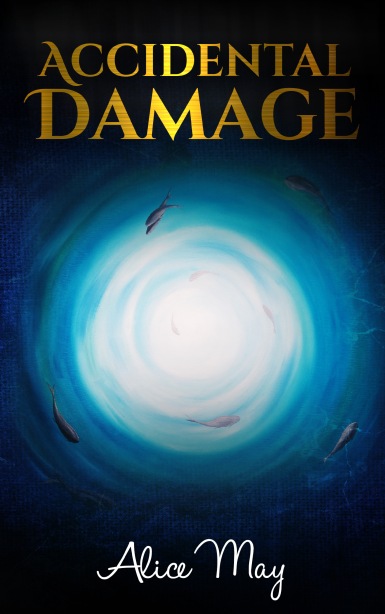 If you think the normal school run on a Monday is entertaining you should try doing it from a tent in your back garden surrounded by the jumbled up contents of your entire home. It is vastly more diverting.

Our heroine has survived the sudden collapse of her home – or has she?

Certain events two and a half years ago led her to deliberately destroy an important piece of herself, hiding away all remaining evidence that it ever existed. What happens when she decides to go looking for it?

Does she really deserve to be whole again?

Inspired by a true story, this is an account of one woman’s secret guilt and her journey in search of forgiveness!

Accidental Damage by Alice May is available in kindle and paperback format from Amazon.co.uk

Definition: an irresistible impulse to act.

It was late in the evening on a seriously scary, stormy night when I finally had to admit to myself that I was a wreck.

A well-known pop diva was letting rip at full volume from the radio in the corner (a vain attempt on my part to drown out the noise from outside). Yet, I was still jumping with fright at each new flash of lightning and then again for the subsequent growling thunder.

As the aforementioned diva vociferously queried the whereabouts of all the more admirable gentlemen in the world, a small part of my brain was muttering, resentfully, that they were all probably comfortably ensconced in the lounge, watching the football with a tinny, like my Beloved Husband, and having a fine old time without us both.

Nevertheless, as the wind howled and the rain pulverised the ground (and the diva continued to lament at length), there I was, a fully grown woman, cowering in the kitchen. I really couldn’t pretend anymore. I knew, without a shadow of a doubt, that it was high time I sorted myself out and in order to do that I needed to find something, or, more accurately, a box of somethings.

This sudden compulsion to take action was unexpectedly and entirely overwhelming. It was so all-consuming that it made the noises of the storm, and even the deafening diva, fade into insignificance.

Incapable of preventing myself, I left the kitchen at speed and dived headfirst into the dark and dangerous space that constituted the under-stairs cupboard in a desperate attempt to excavate long buried treasures. Things that had once been so important to a previous ‘me’, things that I had since told myself I wanted nothing more to do with. Ever!

In spite of my dogged assertion that I was done with them, these gems had somehow been spared the destructive fires of two years previously, when so much of the old ‘me’ was deliberately and systematically obliterated. I had stood in the darkness back then, completely devoid of all emotion, watching as so many things I had loved were engulfed in the heat and crackle of dancing flames.

Yet, secretly packaged away in the deepest darkest space I could find, these select items had been purposefully forgotten.

A line had been drawn. A door closed.

That part of my life was over.

The urge to be reunited with them immediately was so strong that I was heedless of the potential threat from the enormous eight legged occupants, the presence of which usually prevented me from venturing very far into this uncharted territory.

Out came old sleeping bags, wellies of assorted sizes and a plethora of ancient coats and shoes that I vaguely recognised as having been worn at some point by one or other of the smaller humans that roam through the house from time to time in search of food and electronic entertainment.

Right at the back was the box.  I dragged it out eagerly, notwithstanding the unwieldy size and sheer weight of it, and pulled it right across the hall into the little study, oblivious to the trail of abandoned detritus that I was leaving in my wake.

At last I had them.

Opening the box, I released my treasures, carefully extracting one thing after another. Each item unearthed generated a tingle down my spine, a spark of recognition, a brief flash of the person I used to be, as I cautiously arranged them on the desk by the window.

Time passed. I was so utterly enthralled that I did not notice when the storm outside had blown itself out. I did not even register that the radio had been switched off. Wave after wave of memories hit me as each item was excavated, examined and set down. This was what I had been missing. How could I possibly have thought I could survive without them?

What on earth had I been thinking?

We were reunited at last.

A tentative shuffling and a quiet, yet deliberate clearing of the throat broke into my bubble of contentment.

Beloved Husband was leaning against the door jam, the radio, now silent, in his hands. There was a carefully neutral expression on his face as he surveyed the room. (The football must be over. The storm certainly was.)

I looked guiltily at the mess I had generated in the hall behind him and then at the pile of things on the table beside me.

“It does rather look as though it might be,” I agreed.

I couldn’t deny how happy the sight of my easel, brushes, pallet knives and sponges made me. Not to mention the way the sheer range of brightly coloured paints before me lifted my spirits.

My old friends were back!

Was that a hint of fear behind the carefully non-judgemental expression on Beloved Husband’s face? Quite possibly!

Thinking back I can’t really blame him. He was no doubt remembering what life was like when I painted before.  Wet canvasses littering every surface in the house, my obsession with painting invading everything, the forgotten meals, the late nights and early mornings spent throwing colours at canvasses because little things like food and sleep just weren’t as important as capturing a particular image in paint.

Could he be recalling the time he came home from work one day to find that a moment of inattention on my part had allowed our youngest offspring, dressed only in a nappy, to express his artistic side with an entire tube of Alizarin Crimson oil paint all over himself and our brand new conservatory?

Perhaps he is remembering the moment when we stood side by side staring in paralyzed horror at what we initially thought was the scene of a bloodbath (Alizarin Crimson really does resemble that most red of bodily fluids.) before we realised that the semi-naked two year old, writhing on the floor at our feet was not suffering a terrible death, but was in fact enjoying himself immensely.

It is sad to say that the split second of intense parental relief that he was unharmed was swiftly followed by our homeowners’ instinctive urge to inflict bodily harm on the little vandal. This impulse was thankfully quickly superseded, primarily by Beloved Husband’s compulsion to rescue the conservatory and secondly by my guilty need to extract the miniature criminal from the scene and clean him.

I rather think Beloved Husband got the easier job because at least the conservatory didn’t wriggle around and protest vociferously at the liberal application of appropriate cleaning products.

Given our youngest child’s total aversion to bath time on any given occasion, the extended period of cleaning time it took to remove all traces of crimson oil paint from every nook and cranny of his person was probably punishment enough.

For both of us!

Then to add insult to injury I had to clean the bathroom and myself afterwards. Fortunately his sister was old enough to clean herself.

It was my own fault really, for taking my eyes off him. This particular child was exceptionally good at getting into mischief.

An extended telephone call to the GP followed as we tried to decide whether the offender had actually consumed any paint and might therefore require some form of medical attention. The conclusion was that, as he appeared entirely unaltered from his customary destructive self (apart from an unusual degree of cleanliness), it would be kinder to spare the casualty department and the doctor politely suggested that we keep a close eye on him at home.

Beloved Husband was remarkably restrained under the circumstances and did not point out that I should have been doing that in the first place.

That particular event rather marked an important moment in my painting career as I locked the oil paints away and invested in water colours and acrylics, which are altogether less toxic and less permanent.

Now they were back!

Watercolours, acrylics and oils, all jostling for space on the study table!

Beloved Husband could be forgiven for being somewhat concerned at such a development.

“I’ll be careful,” I said earnestly.

There was a moment of silence before he shook his head, rolled his eyes to the heavens and said with a wry smile “Of course you will!” He walked over and placed the radio carefully down on the windowsill switching it back on at a more moderate volume than before.

Then he turned to go, shoving the pile of discarded items back into the under-stairs cupboard and wedging the door closed as he went past.

Looking back at my old friends on the desk, I couldn’t wait to get started. Within minutes there was a canvas clamped to the easel and my fingers itched to get hold of a paintbrush as I rummaged through tubes of colours.

It crossed my mind to wonder how on earth I had survived without doing this for so long. Painting had always been my comfort, so perhaps now, with all my materials around me, I stood a chance of working out how to feel better about myself.

With absolutely no idea what I was going to paint I simply picked up a brush, selected a pot of paint at random and set to work.

At 45 years old, I am a multi-tasking mother with four not-so-small children and I am fortunate enough to be married to (probably) the most patient man on the planet.  We live in, what used to be, a ramshackle old cottage in the country.

My conservatory is always festooned with wet washing and my kitchen full of cake.

Following several years exhibiting as a mixed media artist, I decided that 2016 was the year I would start writing. Inspired by true-life events and fuelled by some really frantic painting sessions ‘Accidental Damage’ wouldn’t leave me alone until it was written. I really hope you enjoy it.

If you have any comments about ‘Accidental Damage’ please send them to: alicegmay@hotmail.com

P.S. Please note that no Barbarians were harmed during the writing of my book.