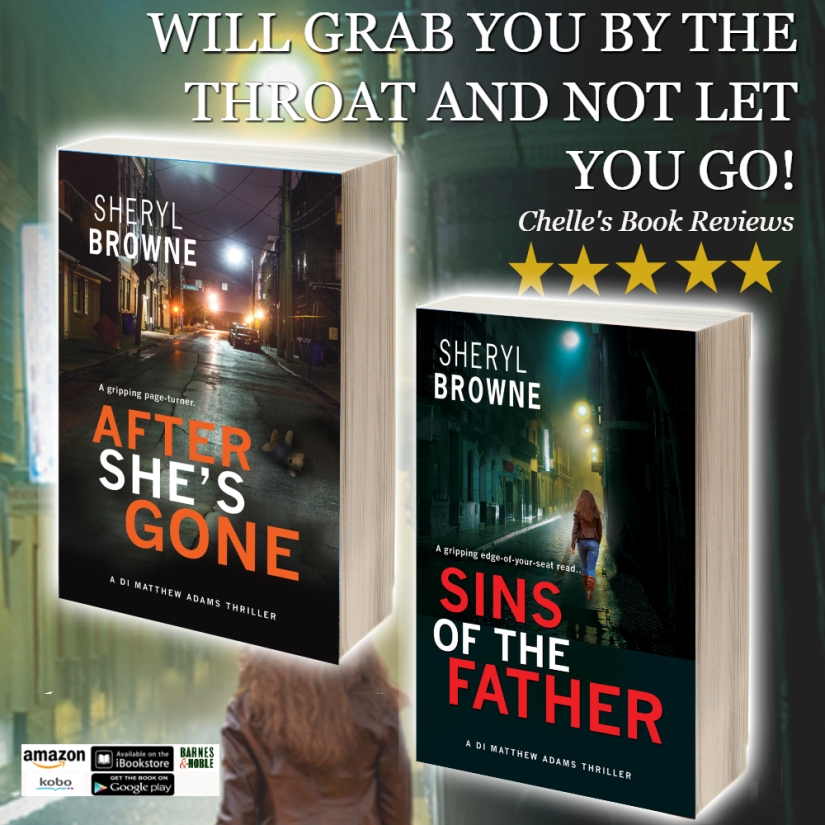 Sheryl Browne not only writes great contemporary romances she is also a talented writer of dark compelling thrillers.  After She’s Gone and Sins of the Father are both due out at the end of February and in the run up to publication day, she’s very kindly agreed to spare some time to chat to me about her work.

Morning Sheryl and thank you so much for coming along…

FIRST, CAN I ASK YOU WHAT PROMPTED THE SWITCH FROM CONTEMPORARY ROMANCE TO THRILLER WRITING?

Well, aside from the fact that, according to one reviewer, I apparently have a scary insight into the mind of a psychopath, I think I leaned towards psychological thriller because I see people as not all good or all bad. More opposite sides of the same coin with some crossover in between. Many of my romance novels feature a policeman and, as my leading characters grew, I found myself exploring police procedural and, inevitably, the traits of the protagonist. I suppose it was a natural progression to write thriller, looking at that family unit and placing it under threat (I’m afraid I put my poor detective in some very traumatic situations).

HOW DO YOU APPROACH THESE TWO VERY DIFFERENT GENRES? TAKE US THROUGH THE KIND OF PREPARATION YOU UNDERTAKE FOR EACH ONE

To be honest, preparation is minimal. I don’t have to channel the emotions. They just seem to be there once I have my character. My inspiration for writing is life, people and the whole gamut of emotion that comes with them. How honest should I be? Something I rarely talk about is the loss of a child, my second. I won’t go into detail, suffice to say, I somehow found myself leaning towards offering counselling to people who had suffered similar loss. Within that role, which extended to counselling in other areas, I realised I could relate to people in a way that touched me to the very core. I lived the emotions. I found I wanted to write about people, all people, people just like you and me, gravitating towards family and family dynamics and just how strong a family unit can be. In ‘reading’ people, I seem to see the bad and the good, and I have to write their stories. Fictional stories, of course. I wake up and there’s a fully-formed character in my head who won’t let me go. He, or she, calls to me. They are what they are (good, bad, happy-go-lucky) and I have to follow them. Does that make sense? Possibly not. Perhaps one day it will to me!

THRILLER OR ROMANCE? WHICH DO YOU ENJOY THE MOST? WHICH GIVES YOU THE GREATEST BUZZ WHEN WRITING?

Honestly, I’m not sure I can choose. As mentioned, my characters seem to tell the story. I live, eat, sleep and breathe them. There’s usually a bad guy or girl in all of my books. As long as the hero grows and the protagonist gets his comeuppance, then I get the buzz.

WHAT CAN WE EXPECT FROM YOU IN THE FUTURE?

I have stories coming out of my ears at the moment. As I seem to be in thriller mode, I’m currently working on a book in that genre, working title: Scream for Me. Watch this space.
Thanks so much for featuring me, Jo.

He’s killed your child and kidnapped your wife. What would YOU do?

There’s evil and then there’s Patrick Sullivan. A drug dealer, pimp and murderer, there are no depths to which Patrick would not sink, and Detective Inspector Matthew Adams has found this out in the most devastating way imaginable.
When Patrick’s brother is shot dead in a drug bust gone wrong, the bitter battle between the two men intensifies, and Matthew finds it increasingly difficult to hold the moral high ground. All he wants is to make the pimping scum suffer the way he did … the way Lily did.
But being at war with such a depraved individual means that it’s not just Matthew who’s in danger. Patrick has taken a lot from Matthew, but he hasn’t taken everything – and now he wants everything.

SINS OF THE FATHER

What if you’d been accused of one of the worst crimes imaginable?

Detective Inspector Matthew Adams is slowly picking up the pieces from a case that nearly cost him the lives of his entire family and his own sanity too. On the surface, he seems to be moving on, but he drinks to forget – and when he closes his eyes, the nightmares still come.
But the past is the past – or is it? Because the evil Patrick Sullivan might be out of the picture, but there’s somebody who is just as intent on making Matthew’s life hell, and they’re doing it in the cruellest way possible.
When Matthew finds himself accused of a horrific and violent crime, will his family stand by him? And will he even be around to help when his new enemy goes after them as well?

Sheryl Browne brings you edgy, sexy contemporary fiction and psychological thrillers.
A member of the Crime Writers’ Association, Romantic Novelists’ Association and awarded a Red Ribbon by The Wishing Shelf Book Awards, Sheryl has several books published and two short stories in Birmingham City University anthologies, where she completed her MA in Creative Writing.
Recommended to the publisher by the WH Smith Travel fiction buyer, Sheryl’s contemporary fiction comes to you from multi-award winning Choc Lit.