CAN’T GET YOU OUT OF MY HEAD BY SUE SHEPHERD

A moving and funny story about sisters, secrets and second chances.

Twin sisters Beth and Lisa do everything together, so what will happen now they both want a life of their own?
Beth has a secret she’s kept from everyone except her sister. But it’s time to get on with her life. Could a seductive Italian, a smooth-talking charmer or backpacking around Australia be the answer?
Lisa feels she’s always lived in her sister’s shadow. Maybe now it’s her turn for some fun, whatever the consequences. But will her drunken antics land Beth in trouble?
And when it comes to the crunch, will one sister have to give up what she wants so the other can have what she needs?
Another entertaining page-turner from the No.1 bestselling author of Doesn’t Everyone Have a Secret? – where things, and people, are not always as they first appear!

Beth was getting out of her car when she heard a familiar voice behind her. ‘Beth Campbell, are you stalking me?’
She spun round, a smile already on her face. ‘Charlie Morris, you wally!’ He held his arms open and she ran to him. ‘When did you get back?’
‘Just over a week ago. Thought I’d come and see you, and, um … and … catch up with Michelle.’
‘You were away for ages.’
‘Yeah. I’ve been gone so long my face ought to be on milk cartons.’ He grinned, then added, ‘Don’t say it …’
‘What?’
‘That my face ought to be on bog rolls!’
‘I would never say such a thing.’ Beth gave his chin a stroke. ‘Your bum fluff hasn’t improved much.’
‘Nonsense. This is a brilliant beard,’ Charlie snorted.
She’d missed his laugh. ‘Michelle doesn’t live in Tennison Avenue any more. She moved out of her mum’s house.’
‘No one can blame her for that.’ He shuddered. ‘Bloody hell. Her mother. Meddling cow!’
‘Absolutely. Michelle’s not far though. She rents a flat with Ricky.’
‘OK. Cool.’
‘Do you want to go for a drink or something? You know, to catch up.’
He gave a casual shrug. ‘Yeah, sure.’
‘I’ll just need to pop in and tell them I’m going out, they were expecting me for dinner.’ Beth gestured towards her parents’ house. ‘Fancy coming in, to see them?’
Again, he was casual. ‘Uh huh.’
She opened the front door and called out, ‘Look who I found loitering outside the house.’
Pat and Don appeared at the kitchen doorway. Don blanched and dropped the tea towel he’d been holding. ‘Oh, Christ.’
‘Is that little Charlie Morris?’ Pat had a closer look.
‘Yep, it’s me. All grown up.’
‘You’re not wrong. How are you?’ She was staring up at him, amazed at his size.
‘I’m good, thanks. Just back from Singapore for a while.’ Charlie held out his hand to Don. ‘Hello.’ With a slightly nervous cough, he added, ‘I’m OK, honest I am.’
Realising he’d been staring, with his mouth open, Don apologised and shook the hand he’d been offered. ‘Sorry, son, it’s just, you know. I can’t help remembering …’
At this point, Nanna came down the stairs. ‘Who’s this, then?’ Examining Charlie’s face, she grabbed the bull by the horns and said, ‘It’s the boy who nearly died. Blimey, you didn’t get like that eating salad, did you?’ Turning to Pat she remarked, ‘You’d never be able to pick him up out of that paddling pool now, would you?’
Charlie grinned. ‘Hello, Nanna. It’s good to see you again.’
‘We’re going to pop out for a drink to catch up. Don’t worry about me for dinner, Mum, I’ll get something whilst we’re out.’ Beth grabbed her handbag and made her way over to the hall mirror. Applying an extra coat of mascara and some fresh lipstick, she then set about adding some cover up to the scars on her chin, a constant reminder not to listen to Lisa’s advice.
‘OK. Just the two of you, is it?’ Pat asked.
Beth looked at Charlie. ‘Um … Charlie wants to catch up with Michelle too.’
‘Well, we don’t have to … I just …’
‘He had no intention of catching up with her, you idiot. Can’t you tell when someone wants to be alone with you?’ Lisa asked.
‘He mentioned her first. I’m just going along with his plan.’
Beth gave Nanna a hug. ‘See you later.’
‘Have fun with the big fella.’
‘You know something, Nanna?’ Charlie said. ‘You haven’t changed a bit.’
Nanna tilted her head. ‘Nonsense, I’ve aged like a sausage in the sun, but thank you anyway.’

‘Can’t Get You Out of My Head’ is a romantic comedy. It’s a moving and funny story about sisters, secrets and second chances.

Part of the book is set abroad. After a traumatic event when the twins are aged seventeen, they decide to embark on an overseas adventure to Australia. That part of the story was influenced by my own experience. Although my trip took place long before the twins went there, I did find looking through my old diaries very helpful.

One of the things I had in common with the twins was that I also spent Christmas Day on Bondi Beach. I was there in 1990. It was a mixed day. I thought I’d tell you about it.

We awoke on Christmas morning to discover that the sun was shining. No surprises there. It shone every day. I think the first thing that really hit me was the lack of family. By this point, I’d been away from England for three months and I was used to not seeing my mum, dad and sister, but never before had I woken up on Christmas Day without them. I was staying in a hostel, sharing a room with a couple of girls I’d known for about two months. Let me just confirm, that’s a very long friendship when you’re backpacking. Some friendships last a day, before you go your separate ways.

Now, I look at photos of me that day, and I am flabbergasted. I’m slim, I’m young, I have very short funky hair. I know I’m saying it myself, but, damn, I was gorgeous. Why didn’t I realise it then? I’m old enough now to look back at that young girl as if I’m looking at a child of my own and be very proud of her. Not just because she looks good, but because she’s fearless. She’s just woken up halfway around the world on Christmas morning, and, to all intents and purposes, she’s alone in Australia!

We were staying in Coogee, but we’d heard that Bondi was the place to spend Christmas Day. We were a fairly large group from the hostel. It may surprise you to know that, even though this was 27 years ago, I’m still in touch with two people from that group. *Sue waves to Irene and Gerry.* As in the Christmas Day scene in ‘Can’t Get You Out of My Head’, there were artificial Christmas trees sticking out of the sand everywhere, and people had written on their bodies in fluorescent sunblock. The atmosphere was strange, a combination of amazement that we were all there in that iconic place on such an important day, mixed with a little sadness that we weren’t with our families. I remember thinking often, ‘What would I be doing if I was at home now?’

We took beer onto the beach. Great big slabs full of little stubby beers. And there we sat, in the blistering heat, and drank those bad boys, like there was no tomorrow. When you’re young, you have this overwhelming need to turn every situation into a party. Back then, Bondi Beach at Christmas was synonymous with backpackers and beer.

In a slight drunken stupor, I decided to go for a lone paddle. As I wandered into the sea, I realised that the current was strong. Within seconds my feet were taken from me. Just for a moment, I was under the water, unsure which way was up, and which was down. I had to keep my eyes tightly shut because I was wearing contacts. Thank goodness I kept my mouth tightly shut too! I waited, what was, in reality, a mere second, but felt like forever, for my head to break through the waves and for my body to become upright once again. As soon as it did, I opened my eyes and my feet scrabbled around, frantic to get purchase on the seabed. As quickly as the horrific incident had started, it was over. In a daze, I made my way back onto the beach. I’d probably been gone no longer than five minutes. Blinking, I located my group of friends, not easy when everyone is covered in the same colourful lettering and each group is sitting around identical small trees. Thank goodness for Gerry’s bright green beach shirt, which I used to guide me home.

Not long after I’d made it back from my summersaulting incident in the waves, an ambulance pulled up at the beach, and two paramedics ran down to the sea. A man from another group, possibly more drunk than me, had also decided to cool off and had ventured into the sea. Sadly, he was not as lucky as I had been, and we later heard that he’d died.

When I was writing about my characters going to Australia in ‘Can’t Get You Out of My Head’, I wondered whether I should allow them to drink alcohol on the beach. Given my experience, it seemed irresponsible as a writer. However, the decision was made for me. In the story, they go to Australia a decade after I was there. So, I decided to Google whether alcohol would still be allowed on Bondi Beach on Christmas Day, and I’m glad to see that it’s been outlawed since 1995, and the area is now strictly patrolled.

I think it would still have been an amazing experience for the characters in my book, and I’m glad I didn’t have to rely on my own moral compass to make the decision.

I’ve spent every Christmas Day since then in England. That time on Bondi remains, to this day, my strangest Christmas. I still feel sorry for the family of the man who lost his life due to over indulgence and silliness, he was no doubt just young and crazy, like we were. I’m also forever grateful that my own tumble in the sea proved to be far less dangerous.

Born in Harrow, Sue went on to spend several years living in Hertfordshire before selling up and taking a leap of faith across The Solent. She now resides on the picturesque Isle of Wight with her husband, two sons and a standard poodle. Her passions in life are: her family, writing, the seaside and all the beautiful purple things her sons have bought her over the years. Happiest when hunched over her laptop with a cup of tea on the go, Sue loves to create stories with plenty of heart and laughs, but she makes sure to include a bit of naughtiness too. Ask Sue to plan too far in advance and you’ll give her the heebie-jeebies and she’d prefer you not to mention Christmas until at least November! 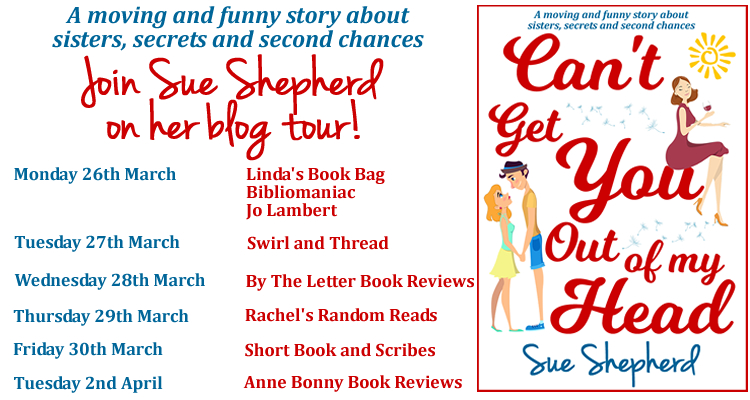