Hi Ros and welcome. Can I start, as always, by asking you a little about yourself?

Hi, I took early retirement, having been a primary school headteacher in three different schools, and we moved to live permanently in France. It was there, with plenty of time on my hands, that I began writing in earnest. I completed a book of contemporary romantic fiction which I initially indie published. I soon took it down after I was accepted onto the RNA New Writers’ Scheme and received feedback on the manuscript. My second book was accepted by Endeavour Press (now Endeavour Media) and after redrafting the first, that was accepted too. Also, I have two novels and a novella which are 20th century historical fiction about three sisters during times of major conflict. These, I have indie published and all three have been awarded ‘Chill with a Book’ reader’s awards as well as two with ‘Discovering Diamonds’ awards. The last in this ‘Strong Sisters series’ is on the way and will be set in the Cold War.

Who are your favourite authors and have any of them inspired your writing in any way?

This is a hard question because there are many. My mum was a published author of many romantic novels and was, too, a member of the RNA in the 1970s. She always encouraged me to write but I was a busy working mum and didn’t get around to it. I hope she’s proud now, from wherever she’s looking down.  I love James Hilton’s books, especially ‘Random Harvest’ which is a great traditional love story with a magnificent twist at the end. He’s more well-known for ‘Goodbye Mr Chips’. I have a copy from 1941 with my granny’s pencilled notes in the margin. She inspired my book, ‘Flowers of Flanders’, although it’s not her story. I guess there’s an emotive response to ‘Random Harvest’ for that reason, too.

How do you go about choosing character names for your novels?

For the Strong Sisters, I needed flower names because they are ‘Flowers of Flanders’ in the first book and ‘Flowers of Resistance’ in the second. So, I chose Rose, for the traditional warm and caring sister, Delphinium, known as Delphi, for the exotic, wild and selfish one and Iris, (Izzy) for the youngest, who will bloom in unusual, unexpected and striking ways as she matures. The last book in the series, set in the Cold War, is probably going to be ‘The Flower that Shattered Stones’. For the contemporary books I trawl names on the internet which seem to suit the times and the personality of the character. Some of my characters are French so I use the same principle.

Beach or city girl? Where are your favourite holiday destinations and why?

I would say beach, but I don’t enjoy lazing on one. I prefer exploring or bouncing about in the waves. My childhood was spent in Cornwall around Penzance, with cousins. Happy memories, and my latest WIP is set near there, in a tiny place called Mousehole. We have discovered cruising recently. That, I do love. Its so interesting to visit different places and also to spend time people watching.

I’ve literally just completed a new-adult romance. That’s the one set in Cornwall. I’m half way through another romance about a 40 something woman who has to relocate from London, following the death of her husband. She moves to a small Northamptonshire village. She needs to rehabilitate to contentment.  A homeless rough sleeper plays a significant part in this and as well as a Frenchman with a mysterious past.

And lastly, you’re planning a year away on a desert island. Name four must haves and the reason for choosing them.

Pencils and paper would, of course, be a must. I’m assuming there’s no electricity or internet. Perhaps a Bible. I follow no doctrinal religion at all, but in the absence of other people it would be good inspiration for adaptation to modern times. It’s full of great stories.  That’s two items. I’m counting the pencils and paper as one. Hope that’s alright. I’d take a family photo. My husband and I have two daughters and four granddaughters as well as two sons-in-law. My last item would be one of my ‘fumsup’.

These are tiny keepsakes of a mannikin given to soldiers in WW1. They have wings on their ankles for a speedy return, a four-leaved clover impressed into the forehead and their tiny arms raise up to touch the wooden bead head. I have a collection of different ones; some brass, others silver or gold. Many are quiTe rare.

I worked as a head teacher, so my writing then was policy documents, essays and some stories to which young children enjoyed listening. I have two married daughters and four granddaughters. Having lived in France for ten years we are now back in England living in a small town between Stamford and Peterborough and loving it. We enjoy ballroom and Latin dancing as well as walking the dogs.

All my books may be purchased here: https://www.amazon.co.uk/s/ref=nb_sb_noss?url=search-alias%3Daps&field-keywords=ros+rendle 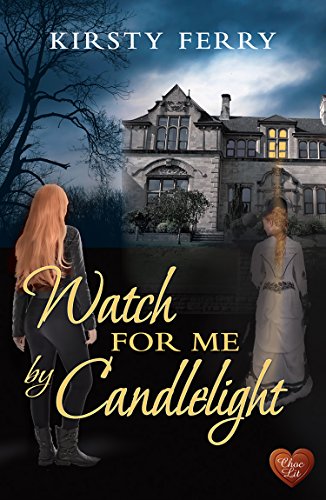 “The stars are aligning and it’s time again …”

Working at the Folk Museum in Hartsford village means that Kate Howard is surrounded by all sorts of unusual vintage items. Of course she has her favourites; particularly the Victorian ice skates with a name – ‘CAT’ – mysteriously painted on the sides.
But what Kate doesn’t realise is how much she has in common with Catriona Aphrodite Tredegar, the original owner of the skates, or how their lives will become strangely entwined. All Kate knows is that as soon as she bumps into farrier Theo Kent, things start getting weird: there’s the vivid, disconcerting visions and then of course the overwhelming sense that she’s met Theo before …

This book does indeed confirm Kirsty Ferry as one of the best time slip authors. In Watch for me by Candlelight we are back at Hartsford Hall in Suffolk. Elodie, who featured in Watch for Me by Moonlight, is now married to Alex and pregnant with twins. This time the story centres on Kate Howard who looks after Hartsford Hall’s Folk Museum. As the story begins Kate starts her day with a visit to the bakery to collect rolls for her breakfast. There she bumps into a stranger. He looks familiar. Kate wonders where she’s seen him before.

Right from the off I really liked Kate’s character. She’s committed to her job, loves Hartsford Hall and the village and has unlimited patience with everyone. One night the unexpected sound of the cuckoo clock downstairs wakes her and triggers the beginning of her time travel adventures. She finds herself back in Victorian times as Catriona Tredegar a young woman staying at Hartsford Hall with her friend Lady Amelia (Millie) Hartsford. A nasty fall while skating on the ice has brought the Hall’s blacksmith Will Hadden to her rescue and sees the beginning of a forbidden love affair between the two of them.

Nineteenth and twenty first century stories run together seamlessly. Kate has her share of troubles with arrogant, self-absorbed boyfriend Chris and her awkward assistant Jenna. And then there’s her attraction to newly arrived farrier Theo Kent, the familiar stranger she bumped into at the bakery. Both heroines face many challenges, Cat probably more so due to the social restrictions of the time.  Her love affair with Will seems doomed from the very beginning. With everything stacked against them can they ever have a happy ever after?

The story is also related in parts from Will and Theo’s viewpoints, adding their voices and life challenges into to mix.  All in all it made for an absorbing read.

Although it was sad to say goodbye to Katie, Theo, Cat and Will, I held onto the thought that Kirsty no doubt still has many more Hartsford Hall tales up her sleeve – great news for all of us.

All in all an excellent read with great characters, well deserving of five stars.

I would like to thank Choc Lit for an ARC copy of Watch for Me by Candlelight in exchange for an honest review.