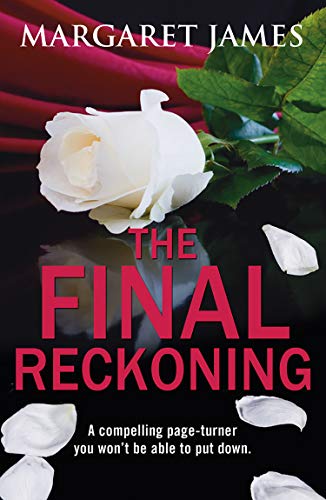 What if you had to return to the place that made you fall apart?

When Lindsay Ellis was a teenager she witnessed the aftermath of a violent murder involving her lover’s father. The killer was never found.

Traumatised by what she saw, Lindsay had no choice but to leave her home village of Hartley Cross and its close-knit community behind.

Now, years later, she must face up to the terrible memories that still haunt her. But will confronting the past finally allow Lindsay to heal, or will her return to Hartley Cross unearth dangerous secrets and put the people she has come to care about most at risk?

Well known for her historical and contemporary novels, The Final Reckoning is a completely new direction for author Margaret James as she delivers her first thriller.

Central character Lindsay Ellis is returning to her home village of Hartley Cross after an absence of eight years. Her mother has died and she is there to organise the funeral and sort out the estate. The last time she was here as an eighteen year old she discovered the dead body of Louis Dyer, father of her then boyfriend Simon. After Simon’s arrest she was sent away to live with her father, who had recently divorced her mother.

Reminders of that long ago time when she and Simon were inseparable tug at her memory.  Acquitted of his father’s murder he now lives in the village where he runs a small antiques business.  Their relationship was an intense one. Is there any chance when they meet again some spark still remains after all this time?

Lindsay arrives with Nick Singer, an astrophysicist with whom she house shares in Oxford. As her own car is out of action he has offered to run her here and stay for a while.  Settling in she begins to make arrangements for the funeral. As she reacquaints herself with the villagers unanswered questions still remain. Who did murder Louis Dyer and why?

There is an incident after the burial which at first Lindsay doesn’t pay much attention to.  However when others occur she realises someone in the village doesn’t like the fact she’s back and wants her gone. But who exactly, and what is their motive?

I particularly liked Nick. Dis-organised and chaotic he came over as a typical scientist, totally committed to his work with little time for mundane things like washing up and keeping the place tidy. I think despite the fact they were total opposites Lindsay had a soft spot for him right from the beginning and it was interesting to see how their relationship developed.

The Casson family, whose bible bashing father was Louis Dyer’s best friend, are also central to the story. Among them the beautiful Jael, married but possibly having an affair with Simon.  Nathan, quiet and surly, a close friend of Lindsay’s and Simon’s during their teenage years.  Jael’s beautiful home is filled with expensive things. How has this been achieved when her husband works in an abattoir? Lindsay soon realises there are many things about this family that don’t quite add up.

This story keeps you guessing all the way. It’s well balanced between past and present so you have all the information you need about what led up to Louis Dyer’s demise.  As the book progressed and I got to know the villagers it seemed clear that more than one person had motive for Louis’s murder and for targeting Lindsay.   A great entertaining read with some unexpected twists.

Thank you Choc Lit for an ARC copy of The Final Reckoning in exchange for an honest review.

Margaret James was born in Hereford, a beautiful cathedral city in the English Midlands. She started writing fiction when her children were very small, and her first novel A Touch of Earth was published in 1988.

Since then, she has expanded her range of writing-related activities to take in journalism, short story writing, teaching creative writing, helping to organise and judge writing competitions, and editing other people’s books.

She was delighted when her novel Elegy for a Queen was featured in the UK’s Woman and Home magazine in a selection of the five best time slip novels. The fact that Margaret’s own favourite time slip novel The House on the Strand was also featured put a big grin on her face! http://www.womanandhome.com/news-and-entertainment/385161/5-best-time-slip-novels

Since becoming a novelist, Margaret has realised that having a name like Margaret James leads to lots of confusion, and in her next life she intends to have a name that she shares with absolutely nobody else.

When she’s not writing, Margaret loves walking, reading anything and everything, gossiping, gardening and eating chocolate. She quite often manages to eat chocolate and write at the same time, which occasionally makes for a somewhat sticky keyboard, but also makes for happy writing.

Just for the record – this Margaret James wrote: A Touch of Earth, Fortune’s Favourite Child, The Treasures of Existence, The Snake Stone, A Green Bay Tree, The Ash Grove, A Special Inheritance, The Final Reckoning, Hallowed Ground, The Morning Promise, The Long Way Home, The Penny Bangle, Elegy for a Queen, The Silver Locket, The Golden Chain, The Wedding Diary, and she contributed to the anthology Loves Me, Loves Me Not. Margaret’s latest novels are Magic Sometimes Happens and Girl in Red Velvet.

The Silver Locket, The Golden Chain and The Penny Bangle are available as a Kindle download entitled The Charton Minster Trilogy.

She was thrilled when The Silver Locket won a prestigious Cataromance Single Titles Award in 2010, and when the cover of The Golden Chain was chosen to feature on the design of a KLM airliner in 2011.The Wedding Diary was shortlisted for the Romantic Novelists’ Association’s RoNA award for romantic comedy 2014.

Margaret and Cathie Hartigan are co-authors of The Creative Writing Student’s Handbook, which takes students through the entire creative writing process. The Short Story Writer’s Workbook is the second of their bestselling guides for writers and is published in ebook and paperback. The third guide in the series is The Novelist’s Workbook and is available now.

See http://www.creativewritingmatters.co.uk for more details of the writing guides and the competitions run by CreativeWritingMatters, which include the Trisha Ashley Award for the best humorous short story.

1 thought on “It’s 22nd January and publication day for The Final Reckoning, author Margaret James’ first ‘not to be missed’ thriller…”